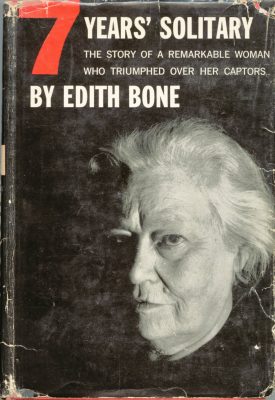 In my teens, I learned about two extraordinary women whose years of forced isolation are now helping me through my own sheltering in place during the current pandemic. I’m a Boomer and those “virtual” introductions of my youth came from books and magazines. I learned about Anne Frank when a friend loaned me the Diary, which Sheila had been surreptitiously reading during math class. That weekend, I read it three times cover-to-cover. The second woman was a Hungarian doctor named Edith Bone, who I learned about from an article in the Reader’s Digest. Arrested as a spy by the Hungarian Communist regime, she spent seven years in solitary confinement.

I live alone and am considered to be in two at-risk categories—I’m over 70 and recently underwent open-heart surgery. I’ve been alone in my apartment throughout this very difficult time and consequently have been thinking a lot about isolation. And the lessons I learned long ago from those two remarkable women are influencing much of my approach to this unprecedented global crisis.

We all know about Anne Frank. Born in Frankfurt in 1929, she was four years old when her family moved to Amsterdam to escape the Nazi racial laws in Germany. By her early teens, it was equally dangerous to be a Jew in the Netherlands and the Franks went into hiding in July 1942 in a “secret annex” in the industrial building where her father worked. They were betrayed to the Gestapo in August 1944 and deported to concentration camps. Anne and her sister Margot died, probably of typhus, in Bergen-Belsen in 1945. To this day, she stands as one of the most significant representatives of that hideous social pandemic of anti-Semitism. Anne was 15 when she died, the same age I was when I read her diary.

Anne’s diary was a small notebook, originally intended as an autograph book,  that her parents had given her as a gift. It was one of the few personal possessions she was able to bring with her when the family went into hiding. People’s choices are fascinating; some years later, a boyfriend who escaped from Budapest during the 1956 Hungarian revolution told me he took his schoolbooks and his ping-pong paddles as his most important possessions when he left home for his lifetime. I often wondered what I would take with me in such a circumstance, and a few years ago I had my chance to find out when my apartment building was evacuated following the Boston Marathon bombing. At that time, I took what I considered my most essential possessions: my passport, a photograph of my parents, and my iPhone charger.

Food was an important issue for Anne’s family when they were in hiding. I remember a scene in the motion-picture adaptation of the Diary in which Mrs. VanDaan, whose family hid in the secret attic with the Franks, becomes hysterical and waves the few remaining potatoes at Anne’s parents, who urgently ask her not to scare the children with fears of starving to death. It makes me realize how fortunate I am to live across the street from one of downtown Boston’s few supermarkets and for the informal network some neighbors in my building have established so that we can back each other up if one of us can’t go shopping for themself. It also reminded me to buy potatoes, a long-lasting tuber, on one of my infrequent trips to the supermarket, although I confess I am already tired of potato salad. Nevertheless, I know I’m one of the lucky ones and increasingly understand the food insecurity that exists in our communities during the good times, as well as the bad.

My friends and I frequently assure each other that “this too shall pass.”

More than 70 years after her death, Anne Frank remains world-famous. Edith Bone (1889-1975), on the other hand, is practically forgotten. Born in Hungary, she grew up in Berlin. A physician and an ardent Communist, she volunteered with the anti-fascists during the Spanish Civil War. By 1939, she was back in Budapest and working as a free-lance writer for the radical British publication The Daily Worker. She was arrested as a spy, imprisoned for seven years, and finally freed during the last days of the 1956 revolution, before the Soviet Union’s intervention. I remember being openmouthed as I read in the Reader’s Digest about the methods she used to survive solitary confinement without losing her mind. In a sense, she relived her education, telling herself the plots of the many  books she had read, trying to name all the characters in Shakespeare’s plays, and creating mental exercises in geometry and languages. Without either Zoom or an iPhone, she took imaginary trips, “walking” through Europe, “sightseeing” in major cities and “visiting” friends who lived there.  I am fortunate in being able to make contact with real people, reaching out to family and friends, particularly if I think they are having a difficult time, or I’m having a down day myself. I don’t walk through the Alps or the streets of London in my imagination, but I do try to get in some exercise each day—and build up my compassion for others by not banging on the ceiling with a broom handle when my upstairs neighbor gets his own exercise by jogging around his apartment.

My friends and I frequently assure each other that “this too shall pass.” For Anne Frank, of course, It did not. Amazingly, however, Edith Bone survived and went on to write her memoirs and work as a translator. During our own extraordinarily difficult time, both women serve as role models for me, representing the strength and courage of human beings who are forced to endure the most horrendous of circumstances, giving life to Samuel Beckett’s comment about dealing with the ultimate existential crisis:  “You must go on, I can’t go on, I’ll go on.”

After a successful career, Kathryn Bloom returned to graduate school received her PhD in English from Northeastern in 2018. She wrote her dissertation on two other Jewish women writers: Edna Ferber and Fanny Hurst.

View all posts by srabinov

1 thought on “Looking back at Two Women during Difficult Times”